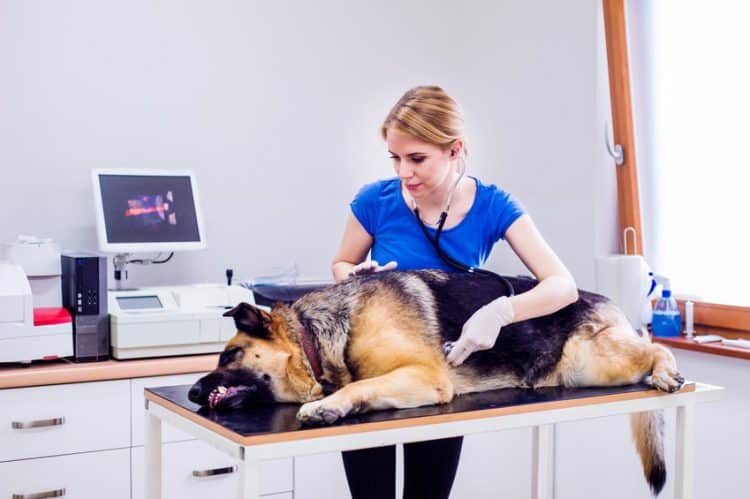 Bloat – the Mother of all Emergencies

Bloat ­ The Mother of All Emergencies
There are many injuries and physical disorders that represent life­threatening emergencies. There is only one condition so drastic that it overshadows them all in terms of rapidity of consequences and effort in emergency treatment. This is gastric dilatation and volvulus otherwise know as “bloat”.

What is it and Why is it so Serious? 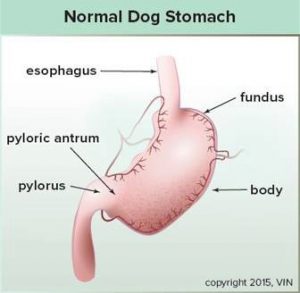 The normal stomach sits high in the abdomen and contains a small amount of gas, some mucus, and any food being digested. It undergoes a normal rhythm of contraction, receiving food from the esophagus above, grinding the food, and meting the ground food out to the small intestine at its other end. Normally this proceeds uneventfully except for the occasional burp.

In the bloated stomach, gas and/or food stretches the stomach many times its normal size, causing tremendous abdominal pain. For reasons we do not fully understand, this grossly distended stomach tends to rotate, thus twisting off not only its own blood supply but the only exit routes for the gas inside. Not only is this condition extremely painful but it is also rapidly life­threatening. A dog with a bloated, twisted stomach (more scientifically called gastric dilatation and volvulus) will die in pain in a matter of hours unless drastic steps are taken.

What are the Risk Factors for Developing Bloat?

Classically, this condition affects dog breeds which are said to be deep chested, meaning the length of their chest from backbone to sternum is relatively long while the chest width from right to left is narrow. Examples of deep chested breeds would be the Great Dane, Greyhound, and the setter breeds. Still, any dog can bloat, even dachshunds and chihuahuas.Dogs weighing more than 45kg have an approximate 20% risk of bloat

Classically, the dog has eaten a large meal and exercised heavily shortly thereafter. Still, we usually do not know why a given dog bloats on an individual basis. No specific diet or dietary ingredient has been proven to be associated with bloat. Some factors found to increase and decrease the risk of bloat are listed below:

Factors Increasing the Risk of Bloating:

Factors Decreasing the Risk of Bloat

Contrary to popular belief, cereal ingredients such as soy, wheat, or corn in the first four ingredients of the ingredient list do not increase the risk of bloat.

In a study done by the Purdue University Research Group, headed by Dr. Lawrence T. Glickman:

In the 1993 study from Germany (see below), the German shepherd dog and the boxer had the highest risk for bloat.

How to tell if your Dog has Bloated
The hallmark presentation of bloat is a sudden onset of abdominal distention, distress, anxiety and pain (panting, guarding the belly, anguished facial expression), and multiple attempts at vomiting that are frequently unproductive. Not every dog will have a classic appearance and some dogs will not have obvious abdominal distention because of their body configuration. If you are not sure, it is advised to err on the side of caution and rush your dog to the veterinarian IMMEDIATELY.
There are other potential emergencies (sudden abdominal bleeding from a ruptured tumor, for example) which might have a similar presentation so radiographs may be needed to determine what has happened. The image above shows the enormously distended stomach nearly upside down and shows what is often called the “double bubble” sign where the stomach is divided into two gas­filled sections suggesting the twist (volvulus) that makes the emergency so dire.

What has to be Done
There are several steps to saving a bloated dog’s life. Part of the problem is that all steps should be done at the same time and as quickly as possible.

First: The Stomach must be Decompressed
The huge stomach is by now pressing on the major blood vessels carrying blood back to the heart. This stops normal circulation and sends the dog into shock. Making matters worse, the stomach tissue is dying because it is stretched too tightly to allow blood circulation through it. There can be no recovery until the stomach is untwisted and the gas released. A stomach tube and stomach pump are generally used for this but sometime surgery is needed to achieve stomach decompression.

Also First: Rapid IV Fluids Must be Given to Reverse the Shock
Intravenous catheters are placed and life­giving fluid solutions are rushed into replace the blood that cannot get past the bloated stomach to return to the heart. The intense pain associated with this disease causes the heart rate to race at such a high rate that heart failure will result. Medication to resolve the pain is needed if the patient’s heart rate is to slow down. Medication for shock, antibiotics and electrolytes are all vital in stabilizing the patient. 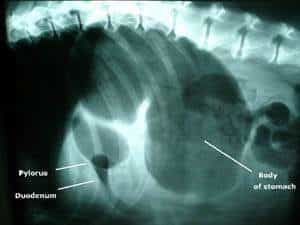 Radiograph showing typical gas distention of the stomach in a case of bloat (Photocredit: Joel Mills via Wikimedia Commons)

Also First: The Heart Rhythm is Assessed and Stabilized
An exceptional and very dangerous rhythm problem, called a premature ventricular contraction, or “PVC,” is associated with bloat and it must be ruled out. If this is the case, intravenous medications are needed to stabilize the rhythm. Since this rhythm problem may not be evident until even the next day, continual EKG monitoring may be necessary. Disturbed heart rhythm at the beginning of treatment is associated with a 38% mortality rate.

Getting the bloated dog’s stomach decompressed and reversing the shock is an adventure in itself but the work is not yet half finished.

All bloated dogs, once stable, should have surgery. Without surgery, the damage done inside cannot be assessed or repaired, plus bloat may recur at any point, even within the next few hours, and the above adventure must be repeated. If the stomach has not untwisted with decompression, the surgeon untwists it and determines what tissue is viable and what is not. If there is a section of dying tissue on the stomach wall, this must be discovered and removed or the dog will die despite the heroics described above. Also, the spleen, which is located adjacent to the stomach, may twist with the stomach necessitating removal of the spleen or part of the spleen as well. After the nonviable tissue is removed, a surgery called a gastropexy is done to tack the stomach into its normal position so that it can never twist again.

After the expense and effort of the stomach decompression, it is tempting to forgo the further expense of surgery. However, consider that the next time your dog bloats, you may not be there to catch it in time and, according the study described below, without surgery there is a 24% mortality rate and a 76% chance of re­bloating at some point. The preferred choice is to finish the treatment that has been started and have the abdomen explored. If the stomach can be surgically tacked into place, recurrence rate drops to 6%.

Surgery will prevent the stomach from twisting in the future but the stomach is still able to periodically distend with gas. This is uncomfortable but not life­threatening.

Results of a Statistical Study
In 1993, a study involving 134 dogs with gastric dilatation and volvulus was conducted by the School of Veterinary Medicine in Hanover, Germany.Out of 134 dogs that came into the hospital with this condition:

Another study published December of 2006 looked at 166 dogs that received surgery for gastric dilatation and volvulus. The point of the study was to identify factors that led to poor prognosis.

It is crucially important that the owners of big dogs be aware of this condition and prepared for it. Know where to take your dog during overnight or Sunday hours for emergency care. Avoid exercising your dog after a large meal. Know what to watch for.
Enjoy the remarkable friendship a large dog provides but at the same time be aware of the large dog’s extra needs and concerns.

Prevention: Gastropexy Surgery
Preventive gastropexy is an elective surgery usually done at the time of spay or neuter in a breed considered at risk. The gastropexy, as mentioned, tacks the stomach to the body wall so that it cannot twist and cause a life­threatening bloat. The stomach may distend with gas in an attempt to bloat but since twisting is not possible, this becomes a painful and uncomfortable situation but nothing more serious than that. A study by Ward, Patonek, and Glickman reviewed the benefit of prophylactic surgery for bloat. The lifetime risk of death from bloat was calculated, along with estimated treatment for bloat, versus cost of prophylactic gastropexy. Prophylactic gastropexy was found to make sense for at­risk breeds, especially the Great Dane, which is at highest risk for bloat.