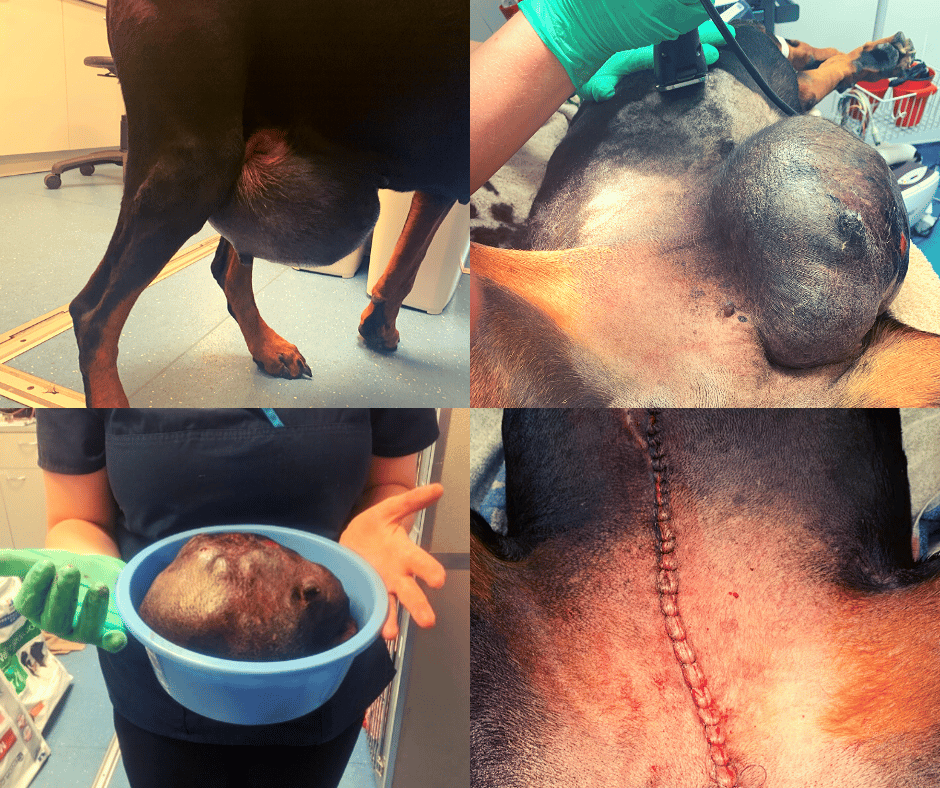 We should not say that Dr Liam Brown has a favourite breed of dog, however for this most recent case the Dobermann holds a special place in his heart… Dr Liam is the owner of a 12 month old Doberman girl named Remi so when we met Tinka we knew we had to help.

Tinka came to the clinic presenting with a large mammary tumour which came up quickly and grew fast. The tumour would require major surgery to remove. With all surgery we know that there is a certain amount of risk involved however in the case of the the Dobermann the risk can be higher than normal.

The Doberman breed is susceptible to Von Willebrand’s Disease (vWD). This condition affects the dogs blood clotting ability and in a case like this, if the dog is vWD positive, even a small bleed could result in severe consequences in terms of uncontrolled bleeding.

To assess if Tinka was even a candidate for surgery a screening test called the buccal mucosal bleeding time (BMBT) was performed. Luckily for Tinka the result was normal and after many hours of surgery to remove the tumour, Tinka was tumour free.

Did you know that if you sterilise your female dog before their first season, the chances of them developing mammary tumours is almost zero whilst sterilisation after the age of 2.5 years results in no increase in protection and the risk of developing mammary tumour is the same as a non sterilised dog. Therefore with regard to sterilising your female dog, 6 months of age is a good time.

We are so happy to say that in this case the patient is recovering well from her surgery and is a lot more comfortable! Well done Dr Liam and the team.

Previous Post What you need to know about Covid 19 and your pet’s health. Next Post Best Christmas Present Ideas for your pet!