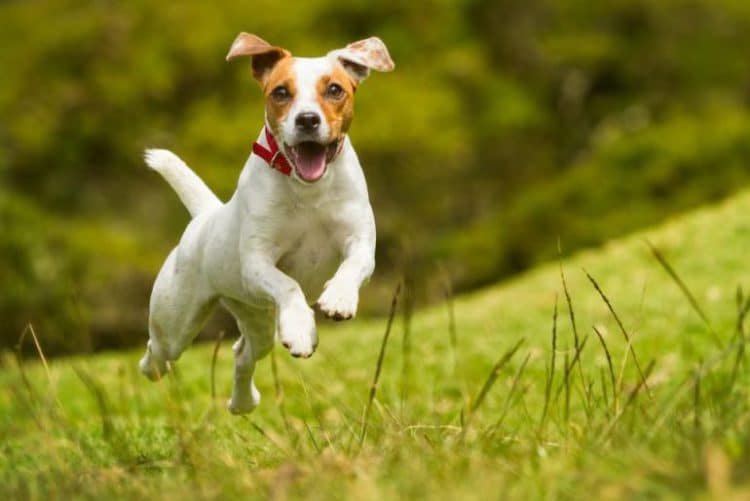 What is cruciate ligament rupture?

Hind limb lameness is often caused by rupture of the cranial cruciate ligament in the stifle or knee joint. This condition can be either;

The knee joint consists of the top of the tibia/fibula associated with a padded meniscus cup in contact with the lower surface of the femur. Between the two bones are the cruciate ligaments – cranial and caudal, that cross over in the joint and act to keep the bones from sliding over each other. Collateral ligaments run on either side of the joint to prevent the bones from sliding side to side. This injury can occur at any age and in any breed, but most frequently occurs in middle aged, overweight medium to large breed dogs. 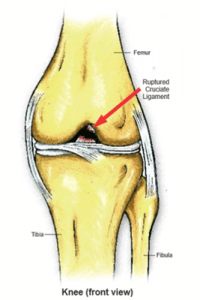 How does the injury occur?

The ligament injury occurs when the forces involved are too strong in a certain direction. Usually an acute (sudden) cruciate injury occurs when the lower half of the leg remains still and the upper half above the knee joint is forced to rotate.
Such events can occur when an animal leaps up or down and twists with the takeoff or landing, places their foot in a hole or between stairs and continues to move forward, or even suddenly stops running or changes direction. The cranial cruciate ligament is the one most commonly affected in these situations.
How do you diagnose cruciate ligament rupture?
Diagnosis involves a few manual tests by the veterinarian and can also involve radiographs for larger dogs.

The common tests are:

The “cranial drawer sign” test
This involves holding the stifle joint with one hand on the femur and one on the tibia/fibula. The vet then tries to move the bones forward and backward to produce “draw” or give. In a normal knee joint there is little to no movement and there is no pain. In an animal with a rupture there is marked movement or sliding of one bone in front of the other, as shown in the diagram below. Pain can accompany the movement. 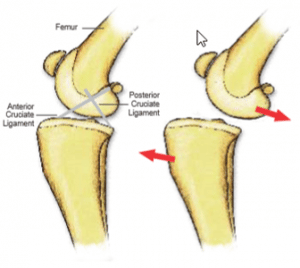 The Tibial Thrust test
This involves the stifle held in slight flexion and the hock being flexed and extended to elicit thrust from the tibia at the patella.
Occasionally a general anaesthetic may be required if palpation is too painful for the animal or if the animal is not relaxed enough to allow a thorough examination.
Ligament strains do occur but generally we see a partial or complete rupture to the ligament. The only way to stabilise the ligament is through surgery. Without surgery, the ligament will not repair or rejoin itself. Several types of surgery have been done throughout the years, but patient selection is very important to obtain the finest outcome.

A better prognosis is given for animals that are;

What does the surgery do?

Surgically, the stifle joint is opened up and explored to confirm the diagnosis of a partial or complete cruciate ligament rupture. Remaining strands of ligament can at this time be cleaned out, the joint flushed and the meniscus examined for tears. The surgeon can then begin the repair.

The three most common techniques to repair a ruptured cruciate are;

We’ll explain each repair in the following pages.

Small dogs and cats usually do well with the De Angelis Technique.

Each veterinarian has a slight variation on the way they use this method of repair. It usually involves the positioning of up to 3 strands of prosthetic suture material in alignment to take the forces that the ruptured cruciate ligament used to.

The material is passed through a drill hole in the tibial crest (shin bone) – some vets use a bone tunnel, and around the back of the fabella (back knee cap) or through another bone tunnel in the condyle of the femur.

The prosthetic material is then tightened by either standard surgical knots or by a metal crimp. A lateral imbrication (tightening of the joint capsule) is also performed after cleaning out the joint and checking for tears in the meniscal pads.

At least 90% of these operations are very successful. Complications can be reaction to the prosthetic suture material, infection and over exercising during recovery.

The De Angelis technique is not usually recommended for;

An animal who is over 20kg, overactive or overweight, will put a severe amount of pressure on the implant meaning there is a greater chance of breaking the suture material. The De Angelis repair does not correct the anatomical problem and as such is not an effective procedure for animals over 20kg or who are overactive. This is a more economical procedure however and will still give a good result in up to 85% of cases. 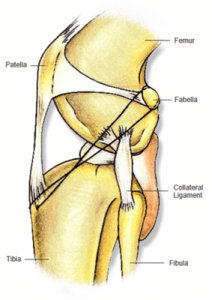 Large dogs may need a TTA procedure to realign the sliding surfaces of the knee joint to prevent the top leg bone from continually trying to move forward over the lower leg bone. This is a more involved procedure, though results are typically more than 98% successful.

This procedure involves cutting the lower leg bone and placing a bone plate on to stabilize the leg. These patients tend to walk on the leg sooner and recover quicker.

A TTA is a complex surgical procedure and a highly skilled surgeon is required to perform it. Your pet will be in hospital for two to three days with this procedure. 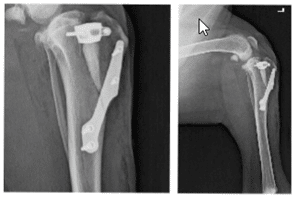 Again, a larger dog procedure, this type involves a realignment of the angle that the tibial plateau has within the stifle joint.

If you can imagine that if the tibial plateau is angled downward at the joint, the femur will then slide forward and put pressure on the cruciate ligament holding the joint in place.

By correcting the angle to be more like a right angle and so perpendicular to the ground, there is no pressure on the joint to slide forwards.

The surgery requires a section of bone to be cut out and then angled and held with a sterile bone plate.

A TTO is a complex surgical procedure and a highly skilled surgeon is required to perform it. Your pet will be in hospital for two to three days with this procedure. 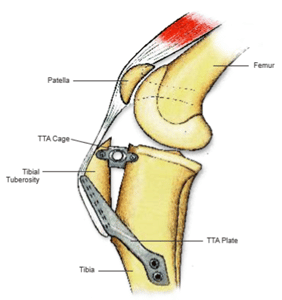 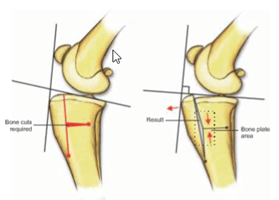